As you read here before, the collaborative effort of the South Florida Bike Coalition and zMotion has lead to the installation of new signage along AIA between Boca Raton and Manalapan, Florida. zMotion released the following press release and photos, which we’re proud to share them with you. 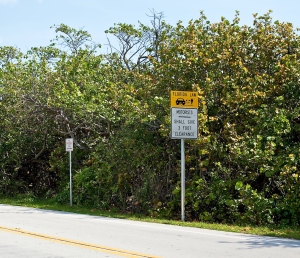 Ft. Lauderdale, FL — May 5, 2010 — Seventeen new signs dot the streets in South Florida, hoping to educate motorists and cyclists about each group’s rights on the road. It’s all part of a program called “Ride Right, Drive Right,” a collaboration between the Florida Department of Transportation, South Florida Bike Coalition and zMotion, a Zimmerman Advertising cycling team.  In all, 17 new signs have been installed along A1A between Boca Raton and Manalapan, Florida.

“These new signs remind motorists they are required to give at least three feet of clearance when passing a cyclist,” says Jeffrey Lynne, President of the Board of the South Florida Bike Coalition. “We are very excited that the first round of signs has been installed and are looking forward to seeing the results. We think it’s going to help save lives.”

The state of Florida is especially deadly to cyclists. According to a recent story in the South Florida Sun Sentinel, Florida is the deadliest single state for cyclists in the country. In an effort to increase driver and rider awareness and safety, Team zMotion – a Zimmerman Advertising Team – created the “Ride Right, Drive Right” campaign in conjunction with the Florida Department of Transportation. The campaign’s goal is to make the roads safer and to save lives by building awareness on the part of both motorists and cyclists.

“It’s a great day to finally see these signs going up along A1A,” notes Pat Patregnani, agency President and founder of zMotion, who worked closely with local municipalities to garner support for the signs. “Team zMotion strongly believes in this effort and hopes to one day see it expanded nationwide,” he adds.

The next phase of the program will focus on sign installation in Miami-Dade County. For more information on “Ride Right, Drive Right,” visit zMotion.org.
ABOUT ZMOTION
zMotion is a Zimmerman Advertising Team.  zMotion has become a visible force in the cycling community with over 600 riding members throughout South Florida.  We ride to raise money in the fight against MS.  We ride to live healthy and enjoy life.  We ride because we care.  And we ride because we can.  We are blessed with good health and the freedom to enjoy this great sport.  For more information, visit zMotion.org.

ABOUT ZIMMERMAN ADVERTISING
Headquartered in Fort Lauderdale, Florida, Zimmerman Advertising, an Omnicom Group™ company, is the country’s leading national retail brand builder, and the 14th largest advertising agency in the United States according to Adweek, with more than 1,100 full-time associates and offices throughout the country, including New York, Los Angeles, Chicago, Dallas and Atlanta. For information on the agency, visit zadv.com.  To learn more about Jordan Zimmerman, his business philosophies and opinions, visit his blogspot: http://www.yousleepwhenyoudie.com/.

ABOUT THE SOUTH FLORIDA BIKE COALITION

Media Contact: Leah Knepper at Zimmerman Advertising at 954.644.4041 or leahknepper@zadv.com.

Have you seen these signs? Let us know. We’d love to post some members’ photos, too.