The South Florida Bike Coalition provides resources, support and energy for local bicycling advocates, organized and less so. We have partnered with groups large and small with all kinds of ends in mind. This weekend, we partnered with 1Sky to promote bicycling to Hands Across the Sand, a worldwide gathering of people standing for a clean energy future.

SFBC works to empower individuals and groups to host their own group rides and races, rather than creating new rides ourselves. So… even though I have helped lead or run rides countless times, it was actually on Saturday that I ended up personally leading a ride for the very first time. Fun! Twelve people gathered in Downtown Miami, a number of whom were unaware of their legal rights to ride safely in roadway. I love the feeling when I get to say, “Yes, you are supposed to ride confidently and safely in the middle of the lane!” Of course, I go on to explain when sharing the lane is either legally required or just plain common courtesy. Riding over the Venetian Causeway bike lanes to the Beach and back gave us lots of opportunities to practice passing to the left, riding two abreast and riding single file, proper bike locking, signaling and they why/how of checking one’s brakes-

On the beach, we saw friends from the Urban Paradise Guild, Surfrider Foundation, ECOMB, the Sierra Club and countless other organizations. We also ran into SFBC friend Liam Crotty, who snapped some sweet shots of us: 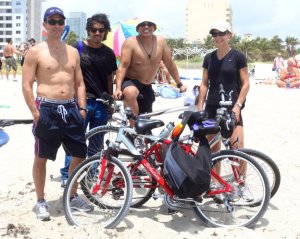 Our friends at Emerge Miami organized the first bicycle ride to Hands Across the Sand that took place last Spring. They couldn’t lead this one because they were co-hosting the Youth Bike ‘Bike Miami Ride’ in Miami’s Upper Eastside, but they rode over and joined us just in time! 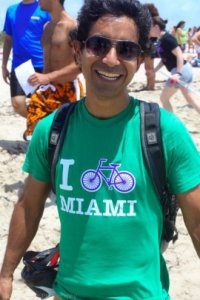 A loud SFBC shout-out and thank you to Emerge Miami, Youth Bike, the City of Miami and everyone who made it a day to remember for children and parents in Morningside Park. ~~

On Sunday, I met up with Daniel and Yvette from the South Florida Slow Bike Movement and @BikeMIA on twitter. Daniel was one of the Bike Miami program’s most dedicated volunteers and it was a pleasure to catch up with him, as always. Daniel talked to me about the bike lane fiasco that is the MacArthur Causeway, (Let’s hope this post serves as a nudge to get him and Yvette to blog their harrowing experience soon!) serving on the City of Miami Beach “Mayor’s Blue Ribbon Committee on Bikeways,” arguing for bicycle facilities on Euclid (in the plan but still on the chopping block), DecoBike (are we inviting 900 people who maybe can’t ride a bicycle and are unfamiliar with road rules to the streets of SoBe?), bicycle theft (3rd time a charm?), and the general excitement in our community for Momentum Magazine‘s upcoming feature on bicycling in Miami (Go Dina Go!)

I only wish that I had time to go on all of the bike rides that happen in South Florida every weekend. We’ve heard Critical Mass, zMotion’s Ride for Josie, Velo Sundays and Ft. Lauderdale’s Urban Ride were all big successes. This Thursday, the ever-expanding Kendall Twilight Ride will celebrate Independence Day with a ‘Freedom’ themed ride. Meet up at 7pm at the Miccosukee Golf & Country Club (intersection of SW 142nd Ave & SW 68th Street) in your red, white and blue and ride round the course four times. It’s a beautiful, comfortable, laid-back ride. SFBC will also be representing this Thursday at a public meeting to discuss toll money for bicycle/safety improvements to the Rickenbacker in Miami-Dade. There are also rides in Boca and Ft. Lauderdale on Thursday and the SFBC Meeting of the Board. Lots to do this week – Ride Safe, South Florida!